what lies beyond the Gate is your imagination and your Destiny! Participate in the shift of Consciousness

that is possible for all of us!

Will you travel the 'High Road' or the 'Low Road' of the ancient principles of the Tarot?

Each card represents a profound and deep understanding of our human experience within our greater 'Soul Journey' Each card is a Key to your personal self-development; we ask ourselves profound questions and discover answers from the shadow aspects of our sub-consciousness so that we may benefit from these healing insights.

The Gate Keeper Tarot is a fusion of Nature's beauty and the creative human spirit on planet Earth.

It was was inspired from the ancient wisdom of Feng Shui, Chinese Astrology, 5 Element theory, and the tradition of Spiritual Tarot. The deck is the integration of YIn and Yang: the Feminine and the Masculine principles. It's vibrant colors, simplicity of design and easy to understand representations of the Major Arcana will appeal to Tarot students and readers of every level.

In times of uncertainty, turmoil and darkness, humanity has always needed tools of 'enlightenment' to cast light into the shadows, to be able to see clearly, and to illuminate our path as we journey through the human experience.

We all need to be reminded of the beauty and magic life has to offer. The images in this light infused 78 card deck are original photographs that contain sacred objects created in the physical realm, fused with rich symbolism and interpretations of the traditional roots of Tarot.

It symbolizes the journey we all take from childhood to maturity and the development of our personalities and consciousness along the way.

Patti Newton has been designing, writing and creating original Tarot and Oracle Decks in Brattleboro, Vermont since 2006. Her first published deck 'The Sanctuary Garden Flower Oracle' is now available in the shop and by order for shipping.

I came into this world as a visual artist.

As early as I have memories, I drew the world around me, as if by doing so I could understand the shapes, color, and patterns that were part of my life a little more deeply, and a little more intimately by knowing their forms. It was what made life magical...

After High School I attended Community College in Huntington Beach California where I earned an Associates Degree in Graphic Design. Back then there were no computers so we learned to do everything by hand. Graphic Design was considered commercial Art although you hand to render and paint everything without the tools of technology that we have available to us today. Cameras we not digital yet. You put film in the back of the Camera and developed it yourself in a darkroom if you had one or sent the roll of film out for development. It was a much slower process without being able to see the results until some time later. I loved photography and at the Museum School in Boston I learned to develop my own photos falling in love with Black and white photography. It had an 'Other Worldly look to it, old fashioned and 'shadowy'. Photography was always a part of my life and I've realized recently that it has been a part of my ancestry as well. We have family photos that we taken back at the turn of the century of my grandmother and her parents in Sweden and a visual timeline that has continued ever since! I never thought much about it because it was just the way we documented life but I've come to realize that was not very common. Really... who had cameras back then?

As a result I have albums and albums full of beautiful old photographs that have been in our family for  over 100 years. and I have kept up the tradition, as the 'Keeper of the photographs'.... Yes I actually get hard copies printed from my phone and my digital camera!

Photographs are moments in time that are captured for our continual review, moments of our life preserved - kept still - in the continuous movement of time. Like Tarot cards, we get to pause and contemplate the stories they contain within the images and what we can learn by looking at them!

Patti Newton moved to Brattleboro, Vermont in 1987 and has been her creative energy towards developing Tarot and Oracle decks as tools of insight guidance and Healing.

Welcome to your Greatest Dream

of your Soul more deeply!

56 cards of the Minor Arcana

The Mind, The Emotions, The Physical Realm and our Spirit or Chi

of the Past and the Present

This is not an ordinary Tarot Deck...

It is not a typical theme deck depicting Amusement Parks, Circuses, and Carnivals...

Some of the images will uplift you... Some will take you away from your comfort zone...

The Dreamland Circus Tarot deck is a combination of beautiful vintage photographs from the 1800's/ early 1900's, and my own original photographs taken at a contemporary amusement park, 'Six Flags New England' in 2015, originally known as 'Gallup's Cove' 1840.

My intention was to create a deck that would allow one to study and read with the Major Arcana more deeply. Most decks offer only one image to represent each of the 22 cards and we use our imagination or knowledge of 'reverse' cards to understand the opposite or 'shadow' aspect 'Dreamland Circus Tarot' gives equal emphasis to both

Coney Island (where I went as a child and a teenager),

'The Five People you meet in Heaven' movie and book by Mitch Albom,

'The Museum of Extraordinary Things' by Alice Hoffman,

The Night Circus by Erin Morganstern

and every carousel I've ever ridden...

at the Retail Shop

or to be ordered and shipped

Complete book for the 78 Card Deck

Patti Newton has lived in Brattleboro Vermont since 1987 and has been designing and creating tarot and oracle decks and books since 2006.

One for the 44 Cards of the Major Arcana

and one for the 56 cards of the Minor Arcana

Patti Newton offers Tarot Readings at her shop in Brattleboro, Vermont or by phone. She has been developing her original collection of Tarot and Oracle decks and books since 2006

It’s 48 beautifully illuminated cards of insight and messages gifted from the Flowers and the elemental energies that co-exist in my garden here on a small hilltop in Southern Vermont.

On the West side my yard borders a deep woodland, and on the East side, a valley that is home to many forest dwelling creatures as well as Birds of all seasons and varieties. Living in Vermont I have developed a close relationship to Nature and as an avid gardener an even closer relationship to the Flowers I have welcomed into our humble yard.

It is thought of as a ‘Sanctuary Garden’ because one of my goals is to continue to plant even more varieties of Flowers that attract Pollinators of all types; Bees, Butterflies, Hummingbirds, Insects and other living beings that contribute to the preservation of our precious tapestry of Life. All are safe here - I use organic natural fertilizer, and leave all my garden waste and leaves over the winter so it provides shelter and protection even for the tiniest creatures that live in the soil and under the surface.

My intention regarding this deck was to create a Tool for Guidance, Awareness and Healing potential!

I have been a Flower Essence practitioner for over 30 years and in understanding the powerful healing effect of the vibrational qualities of Flowers in tincture form, I was guided to create this deck so we could work with the flowers on a visual level as well as energetically.


This deck is self-published and assembled in smaller quantities to infuse love and Blessings!
A special Thank you! to all of you who have already purchased the cards! I hope you’re enjoying them as much as I am on a daily basis!

Patti Newton of Brattleboro Vermont is the Designer, Artist and writer of original tarot and oracle decks.

Inspirational Messages from the Flowers and Garden Elementals

My intention regarding this deck was to create a Tool for Guidance, Awareness and Healing potential.

I have been a Flower Essence Practitioner for over 30 years and understand the powerful healing effect of the vibrational qualities of Flowers in Tincture form.

Directions: Fan the cards out in front of you on a surface of your choice (a nice Alter, Sacred Space, cloth or scarf is always a plus!) and pick one that you are attracted to (or you can shuffle the deck, cut the cards in your favorite style and pick the one on top!)

Read the message, interpret how it speaks to you on a personal level, and then turn the card over ( to photo side of the card) and enjoy the ‘Essence’ of the Flower/ plant/ or elemental that would like to share its healing gift with you! Ask for general insight, guidance to a specific issue or question and take the time to really understand how this message may be perfect for you!

The 'Sanctuary Garden Flower Oracle' by Patti Newton is the first to be published from her original collection of Tarot and Oracle decks and books. Patti lives in Brattleboro, Vermont.

On the back of the cards are my original photographs of these divine beings (note: I was guided to leave them in their natural state and not Photoshop them as  it's true - who can truly improve on the energetic beauty of a flower?)

Patti Newton loves the Natural Beauty that surrounds Brattleboro Vermont, it has been inspirational for creating her original Tarot and Oracle decks and books!

3" Commemorative Sticker on back side of box

Letter from the Artist included with each deck

Insight, Guidance and Inspiration from the Flowers and Garden Elementals

Elementals bring our awareness to a deeper place of our consciousness. They often address the question our heart was longing to ask but our mind conveyed it otherwise!

Patti Newton owner of 'Silver Moon Adornments' retail and personal service store established 2000. Patti has been a 'Flower Essence' Practitioner for over 30 years 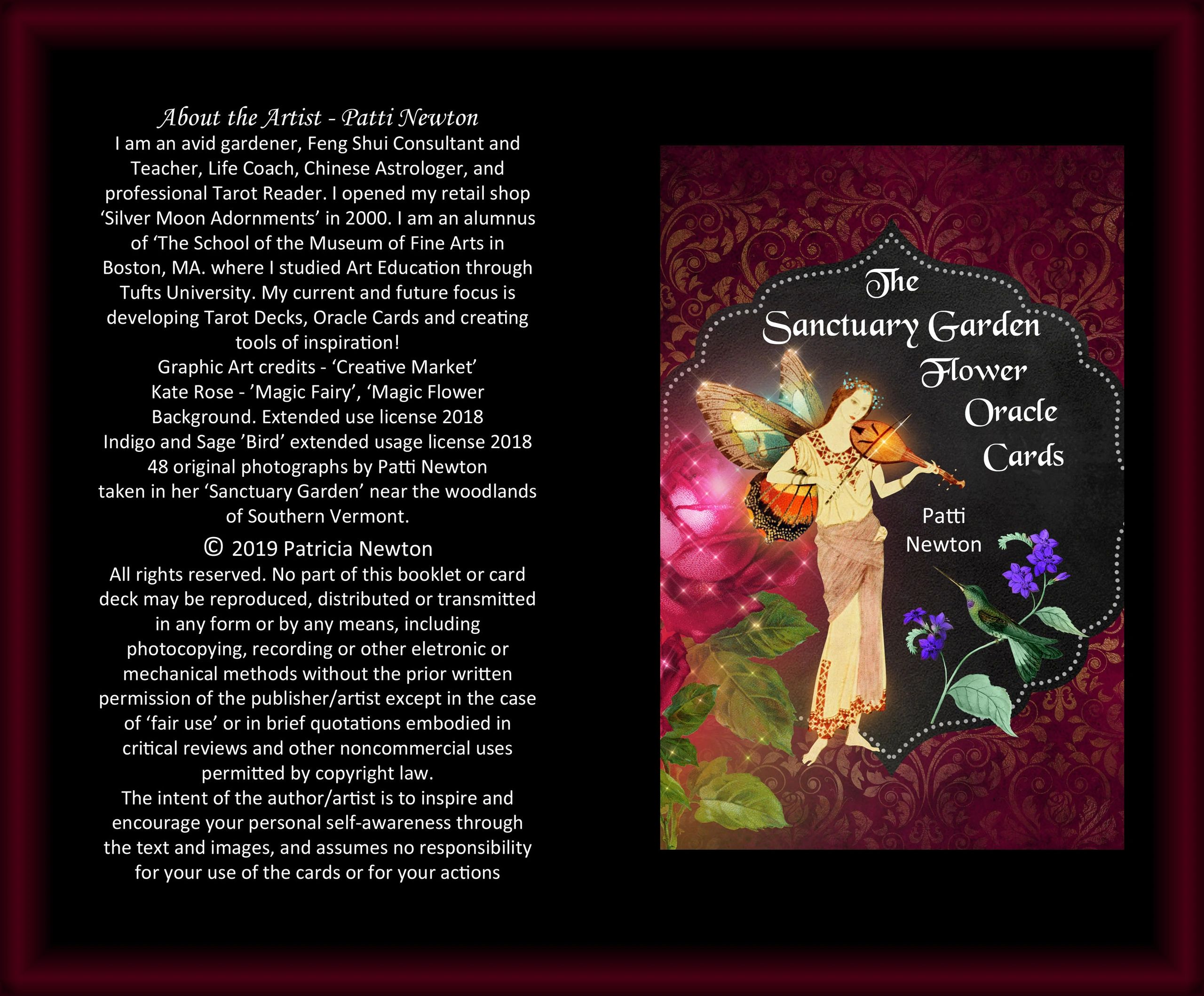 Keep your eyes open for the NEW BLOG I will be creating for 'The Sanctuary Garden Flower Oracle' Deck with posts and Interesting Commentary on the Individual Cards!

Patti Newton has lived in Brattleboro Vermont since 1987, Her creative focus on developing her Original Tarot and Oracle Decks began in 2006. 'The Sanctuary Garden Flower Oracle is the first one published of her collection. Two Tarot Decks ready to go! But as tempting as it is, I don't want to release them without their companion Books!